The Economist Intelligence Unit has one of the largest and most experienced country and industry analysis teams in the world. Our 100 full-time country experts and economists, based in offices around the world, have a thorough grounding in economics, politics, risk and industry. Most have lived and worked in the region they cover; many are fluent in local languages; and three out of four have advanced degrees. To ensure that this expertise remains fresh and up to date, each country analyst focuses on two or three countries, and visits them regularly.

Our experts are supported by a huge network of contributors based in virtually every country of the world. Currently numbering 650, our contributors report on recent economic and political events, comment on the business environment and legislative changes, and give their views on political, economic and social trends.


In the US the Democratic field remains unusually crowded as the February primaries draw nearer. Which candidate wil… https://t.co/W1ZhvYq9Pa

A win for South Bend mayor Pete Buttigieg in Iowa, where he is a serious contender, is essential if he wants to bec… https://t.co/pcxNJvQm83

#Singapore rose to 4th in the #WEFFI 2019 with strong performance in its teaching environment. How is the nation st… https://t.co/LZnDAlMEks

Metadata is, quite simply, data about data. It includes descriptions of the source, collection and calculation meth… https://t.co/9CxqpmjGgR
FOLLOW The Economist Intelligence Unit ON_TWITTER
Monday, 19 September 2016

A report published today (September 19th) by The Economist Intelligence Unit (EIU) based on a survey of 360 policy makers in eight countries show that local concerns such as improving employment, education or health are higher priorities for governments than cross-border challenges as curbing climate change or income inequality. Though this local focus is understandable, it threatens to undo and reverse progress in areas that require cross-border collaboration such as environmental sustainability and sewing peace in unstable regions, the report states.

Evolving development goals in an evolving world, sponsored by Microsoft, assesses how governments rank their needs and aspirations today, the levers they value to meet these goals, and how their priorities are likely to shift in the future.

In recent years, cross-border goals such as boosting environmental protection and addressing income inequality rose in prominence among policymakers, as a foundation for a more peaceful and prosperous future. But these goals seem to have slipped in select countries across Europe, North America, Asia and Africa, behind more immediate concerns such improving economic opportunity, innovation, healthcare and education.

In a survey for the report, policymakers in all countries rank expanding economic opportunity, improving infrastructure or increasing industrial innovation as a top three development goal. But protecting the environment and natural resources ranks only fifth, globally and efforts to reduce inequality rank eighth (last) globally.  (Please see the chart below.) 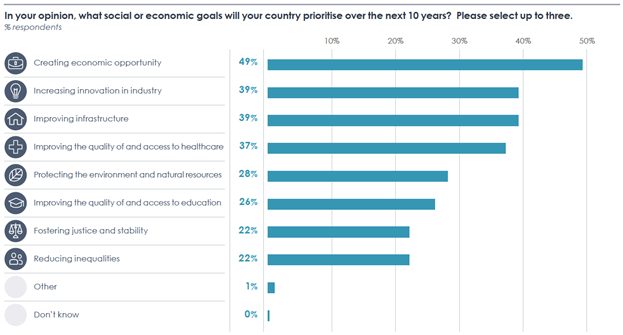 Carolyn Whelan, the report’s editor, said: “The relatively low emphasis on tackling inequality is surprising, given talk of inequality stoking Britain’s EU exit and an overheated US presidential campaign.  However, the broad agreement among policy makers that collaboration between sectors will be critical to meet this and other pressing social and economic goals offers hope.”

Despite a retreat from trans-border issues, collaboration is a bright spot, with nearly 90% of respondents describing collaboration and partnerships as either “very” or “somewhat important” to meet their country’s top development goals.

Evolving development goals in an evolving world can be read here

For more information, please contact:
Mathew Hanratty
Corporate communications manager
+44 (0) 20 7576 8546
This email address is being protected from spambots. You need JavaScript enabled to view it.

Carolyn Whelan
Senior Editor
Thought Leadership
+646-549-3108
This email address is being protected from spambots. You need JavaScript enabled to view it.

About the survey
The report is based on a February 2016 survey of 360 policymakers evenly dispersed across Canada, Denmark, India, Kenya, Poland, Singapore, the UK and the US on eight social and economic priorities. These goals loosely align with the United Nations’ 17 Sustainable Development Goals.  Respondents represent a variety of functions and serve in mid- to senior-level positions, with 73% civil servants. They are employed by government agencies or organisations that focus on areas ranging from trade and transportation to agriculture and education, with  the largest group (42%) working for federal or national, 33% local (including county and municipal) and 24% for state or provincial bodies.

Microsoft (Nasdaq “MSFT” @microsoft) is one of the world's leading platform and productivity companies for the mobile-first, cloud-first world, and its mission is to empower every person and every organization on the planet to achieve more.